Robert has presented to more than 550,000 people in over 100 cities across North America.

“Robert’s story is one that moves and empowers everyone.  Robert’s message of hope, acceptance and self-determination is so valuable to a community.”
~ Tracey Tyner Cavanaugh,
Regional Municipality of Durham

“As for Robert’s presentation.......what can I say. The man is clearly at the “top of his game” and left everyone inspired that set the tone for the entire event.”
~Kirk Crowther, Canadian  Down Syndrome Society

“Robert's dream and execution of it was as polished and as vast as many of the top motivational speakers out their today such as Les Brown and Zig Zigglar. His message is deep and accessible to all people.”
~Happy Marketing Group

“Every now and then you meet someone who catches your eye and grab your attention - Robert Pio Hajjar is one of those people!”
~Herb Goodhoodf

"He is the poster for what is possible.”
~Kelly Nugent, Royal Bank of Canada

Some highlights of Robert’s successes include:

With his life savings of $62.05 he co-founded the influential Ideal Way charity, and conceptualized the IDEAL Gives Program, which has collected and donated merchandise, and hot meals, valued at more than $705,000 to help relieve poverty

2016 Appointed to the Order of Ontario by the Honourable Elizabeth Dowdeswell, Lieutenant Governor of Ontario

The 2016 June Callwood Outstanding Achievement Award for Voluntarism awarded to IDEAL Way by the Ministry of Citizenship, Immigration and International Trade, for superlative volunteer contributions to Ontario

Ideal Way among top 33 finalists of 2800 eligibles; received funding from Show Us Your Goodness Contest

The only individual from North America to receive the inaugural United Nations designated “World Down Syndrome Day” Award by Down Syndrome International, in the Voluntary and Professional category, "for your outstanding contribution to raising awareness of Down syndrome.

Recipient of the City of Toronto "Unsung Hero Award" presented by the Honourable David C. Onley, Lt. Gov. of Ontario on Dec 3, 2009, the
International Day of Persons with Disabilities... Robert’s 32nd birthday

Judge for Canada Blooms, the largest flower and garden festival in Canada.  Robert’s role was to give his perspective regarding safety, aesthetics, accessibility and design.

At Ideal Way we are working to create hope and the opportunity for a better world.

But we can only do it with your help. Join with us in our mission and donate now.

"Transformative" Motivational Speaker
Appointed to the Order of Ontario 2016 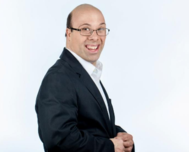 Robert Pio Hajjar was born to be a Champion and is dedicated to his calling. A gifted, charismatic speaker, he makes a difference in the world by celebrating life in a way that motivates others to realize their dreams. His dream is of an inclusive society that recognizes the diverse talents and abilities of all members, and values difference as a resource that enriches the whole. He believes love, encouragement and opportunity bring out the best in an individual, which in turn builds a stronger society and a better world.

Travelling widely, Robert spreads his message of hope and inspiration. He has presented to more than 550,000 people in 100 cities throughout North America. Listening to him, you understand the importance of making the most of your life, regardless of obstacles imposed by the misinformed. He inspired the I Can, You Can Program that is being rolled out in the Thames Valley District School Board and is quick to point out, “The cards that were dealt to me in life are not as important as how I play them. I love my life.” He plays his hand like a true champion, raising his voice against the injustice of exclusion, advocating for those who cannot speak for themselves.

Robert's first book, I Love My Life is available. More remarkable than his accomplishments, is the person he is. 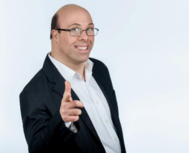